And it’s for sale

For almost 14 years, it was widely believed Jeremy Clarkson’s 1981 Lancia Beta Coupe was sent to a salvage yard and scrapped shortly after Top Gear finished filming their Top Gear Botswana Special in 2007. But now, according to Botswana resident and Youtuber Ryan Bell, after months of work and honest-to-goodness pavement (or dirt) pounding, he’s located the famed Lance Beta Coupe and provided proof of authenticity.

Bell took to Facebook’s “Safari all cars” group to share exclusive video shot from Maun, Botswana, where the Coupe was found, along with a photo of the car’s title. Check out his video and photo of the title below.

“A few weeks ago we found one of the most famous safari cars. We found Clarkson’s Lancia from the old Top Gear Botswana special! It wasn’t supposed to exist anymore. But 13 years later and we found it. I put together a short video of it.“

“It took about six months to find it. I have the title and it was registered to the company who helped produce the TG Botswana special and the Uganda Special. It’s for sale for around $950US if anyone wants to buy it and restore it.“

“I’ll help put it in a container for you. Someone needs to restore it. We dont have the money or the availability to get parts here…. We just found it and it was amazing that it still exists despite every article and other info we could find said it was junked.“

From what I found out, it was “scrapped after filming.” But someone put it back together, and it was running after the special ended. Guessing it broke again and there it sat. No clue how the doors got put back on it after it was in superleggera mode….

The people I talked to in order to find it, the back stories on how it got there, and the fact it has the same number plate. 100 percent. Then add in the rifle hole and the burns on the bonnet. And the fact there are no other Lancias in Botswana. I don’t think you get just how remote Botswana is…

A quick Google search brings up photos of this exact Lancia Beta Coupe spotted 13 years ago by a Flickr uploader on his own trip to Botswana. 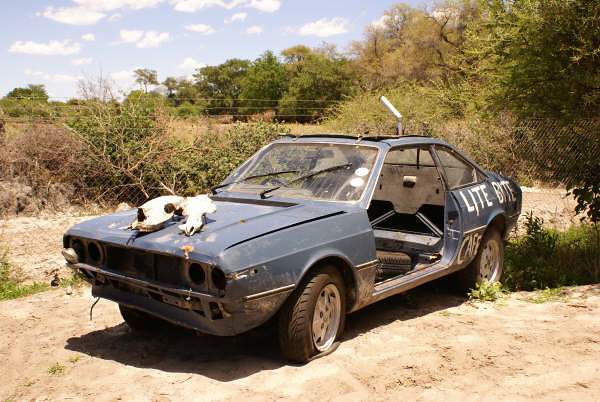 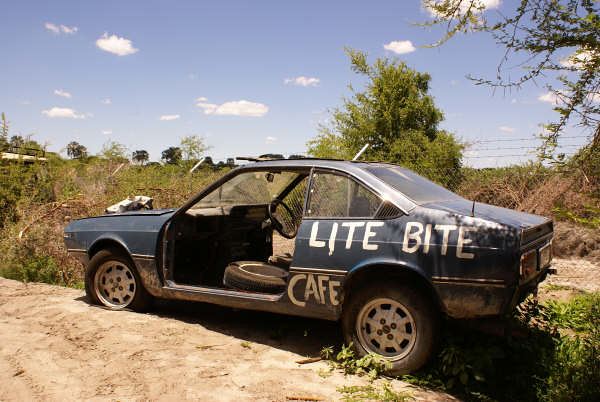 And here’s a bit of the Botswana Special via BBC’s YouTube below.

Title aside, comparing Bell’s found Beta Coupe with the actual Top Gear footage and the photos from 2007, all the minor details we can spot line up.

This is the real deal.

The paint, baked by the sun for all these years, has gained a nice patina only Africa’s sun can replicate. The mounting points for the skulls on the bonnet are placed exactly where they need to be. The lettering for “Lite Bite Cafe” is weathered just so. And, as Bell points out, even the battery post shorting out on the hood exposing bare metal to the elements is still there, nicely rusted from exposure.

The real proof of authenticity is that Title. As Bell mentions, Afri screen CC is listed as the go-between with Top Gear BBC and the triumvirate that is Clarkson, May, and Hammond. Afri Screen explicitly states on their website they’ve provided “facilitation work” for the Top Gear- Botswana special. Purchasing cars from South Africa and importing them to Botswana definitely fits that bill. Interestingly, Afri Screen paid 7,800 South African Rand for the Lancia which is roughly $500.

Priced, as mentioned, at $1,000, this might be the cheapest piece of rolling Top Gear history you can own.Of course, the tough part is exporting the Lancia Beta Coupe out of Botswana. For example, as the crow flies, it’s about 8,700 miles from the United States. A quick google reveals it’s roughly $2,500 to ship a car from South Africa to the United States. Double that to account for transporting from Botswana by truck, add another $4,000 for miscellaneous import fees, titling, tipping Bell for helping coordinate importing, etc, and this can be yours stateside for about $10,000.

If someone doesn’t save it, I reckon it’ll continue sitting there for many years to come. Perhaps that’s the fate it was always destined for.