When you’re in the motherland of all things JDM, you’re going to use the very best that your country offers, and for wheels, that means Volk Racing TE-37’s.

Earlier this month a post about TE’s on this extended swing sports bike with TE’s took the car community by storm furthering the hypothesis that Rays TE-37’s wheels look good on just about anything. Now, as per my perusing on Twitter, according to SIFT Japan’s SAE Formula Team on there most recent post earlier this week (Oct. 23,2018), it looks like that hypothesis is stronger than ever with their SAE Formula car sporting that aforementioned set of TE’s. In an open-wheel design, free from any fenders, on their own, TE’s actually make these SAE Formula cars look that much better. Take a look at their post below.

A cursory search on the list of Formula SAE teams in Asia reveals that the two most popular wheel choices are the Work TE-37 and RS-Watanabe wheels, two JDM wheels that have stood the test of time both for their looks and performance. In addition, it looks like the tire of choice, probably in line with FSAE requirements, are the popular Hoosier slicks, the quintessential track tire unparalleled in performance and grip but not from Japan.

This particular Formula team runs in SAE E or SAE Electric. That means this little Formula car packs a 4.4 kWh battery with two electric motors driving the rear wheels which are good for a combined 21 HP and 33 lb-ft. In an overall package that weighs just 917 pounds without the driver, it’s enough oomph off the line for a decent parking lot time attack assault without getting out of hand.

These are some real-deal Formula cars with some true to life CFD testing as well. Check out this simulated wind-tunnel testing below. Compared to the previous Formula SAE E car, it’s a lot more slippery through the wind. 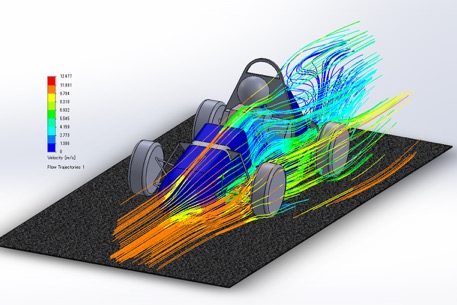 It’s probably not all that interesting of a wheel choice for them, but to me, an outsider in California, it’s one of the coolest wheels a university can choose for their Formula SAE car.